Curated by Bonnie Rychlak
Courtesy of the Danese Gallery

ArtHelix (formerly the Bogart Salon) is pleased to present its premiere exhibition:
a series of drawings by the acclaimed artist Jene Highstein, one of America’s
eminent post minimalist sculptors. Made between 2008 and 2012, a selection
of the Cape Breton drawings will be exhibited for the first time in New York.

Jene Highstein’s drawings have heretofore been made on etching paper with
dry pastel or chalk but more recently he switched to hand mixed watercolors.
They have been almost exclusively in black. While reflective of his object-
making, the black drawings addressed his minimalist concerns along with “anti-
illusionist” strategies of process and the mechanics of gravity. Highstein’s recent
sculptures, although of a pared down appearance, continue to relate to the
natural world, referencing vortexes as well as plant and animal forms. 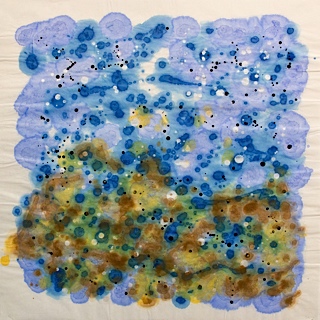 The Cape Breton Series of colorful drawings charts these more recent sculptural
concerns while continuing to illustrate “hidden underpinnings” of meaning that
Highstein has explored throughout his process; a channeling of the natural world
with an inspiring heuristic Asian component. However, any specific relationship
to a specific tradition such as Chinese calligraphy is loose, having more of a
philosophical kinship than one of imitation. In these expressive, and sublime
musings, repeated over and over, the beauty of Highstein’s island’s surroundings
reveal the ability of nature to alter one’s consciousness.

These watercolors on rice paper have the most immediate associations to
calligraphy but it is the immediacy of the splatters and drips that enforce a
sensation of gravity that seems to exert a force that subverts and overtakes any
emphasis to handwriting. The almost pictorial cursive drips are either absorbed
by the thin paper or run down the page along numerous registers. These
drawings are aggressive and yet soft and light in tone without establishing a
narrative. Viewers may still find their own symbols and images within Highstein’s
purely abstract compositions.
In recent years, Cape Breton, a headland located at the Northeastern extremity
of the Canadian province of Nova Scotia, has been a summer retreat for
Jene Highstein. With heart-stopping views around every corner, from the wild
Highland mountain range that towers above the clear blue Atlantic Ocean, to the
sun rising over the waters of the Bras d’Or Lakes this Acadia continues to be a
muse for Highstein. This series of drawings from 2008 to 2012 is aptly named
after the afflatus of this island.

To see more of Jene Highstein’s work, please visit his website at http://www.jenehighstein.net.